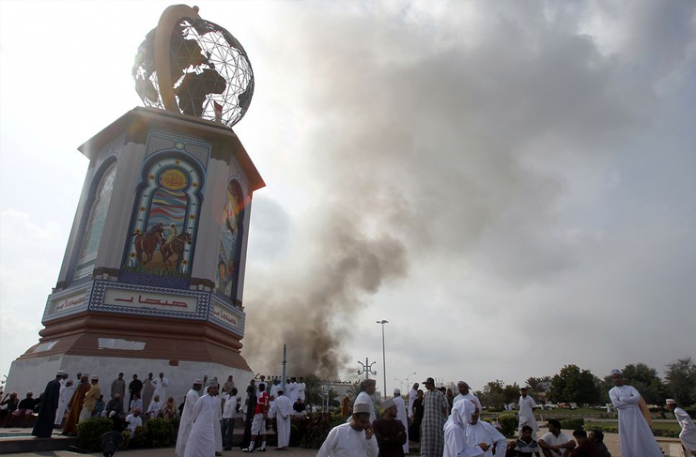 Muscat (Oman) In the last few days, there have been violent protests against the government in the Gulf state of Oman, during which the police were pelted with stones and the police fired tear gas in response. Some people have also been injured in the protests. According to details, locals in Oman have been protesting against the loss of jobs and low living standards.

Oman’s Sultan Haitham bin Tariq has taken note of the protests of Omani citizens and directed immediate steps to provide them with employment. Under the scheme, more than 32,000 people will be given jobs this year. Despite the announcement, some people in Oman continue to protest.

Also Read This: Important News For Pakistani Business Aspirants In The Gulf

According to Al-Arabiya News, police in Al-Barimi province of Oman announced the arrest of 13 people on Friday.

These people are involved in riots and arson of public property. Authorities will take necessary legal action against these people. Several people were also arrested yesterday.

They were involved in roadblocks, hijackings, attacks on pedestrians, and destruction of public and private property, including shops.
Police say some of them stormed shops and set them on fire. Such demonstrations have rarely been seen in Oman before. On the other hand, the decree issued by Sultan Haitham bin Tariq on Tuesday According to him, 2,000 Omani citizens will be given jobs in the public sector. In addition, people will be provided one million part-time employment opportunities in various government departments.

Sultan Haitham has also announced for the first time that the government will provide various compensation to those who join the workforce and get new jobs. A clause in his decree states that “the country’s private sector labor market 200 new riyals will be paid to the new employees joining the company. Also, the employers will fill the gap of the agreed salary and 15,000 jobs will be created for two years.

The government says the Ministry of Labor will announce the necessary “control and operational mechanisms” in June in light of the new decrees. Sultan Haitham bin Tariq on Wednesday directed that 2,000 jobs be created in the public sector. ۔ The Ministry of Defense has announced that it has started receiving applications from job seekers from Thursday.