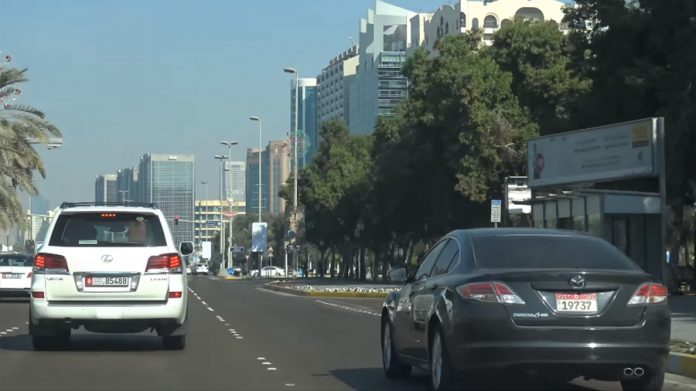 Abu Dhabi (Gulf Inside) Police have warned that those who drive at low speeds should stay in the right lane of the road, while driving in the left lane will be fined.

Now will be fined for driving at low speeds. Abu Dhabi Police has issued a warning that drivers who drive slowly in the left lane or speed lane will be fined 400 dirhams. Because they cause problems for speeding vehicles coming from behind. If one has to drive at a low speed, he has to stay in the right lane.

Because the left lane is reserved for high speed vehicles. Most drivers drive at low speeds in the speed lane, making it difficult for high-speed vehicles coming from behind to pass. If a driver does not allow a speeding vehicle to pass in the left lane, he will be subject to a traffic fine.

Read This : Dead Line Issued For Seized Vehicles In Ajman

The left lane is reserved for overtaking vehicles, driving at low speeds on it is an obstacle for others to overtake. Police have posted a video on their Twitter account explaining how dangerous driving in the left lane is against dangerous traffic rules that can lead to a fatal accident.

The violation is being monitored by surveillance cameras and the perpetrators are being fined 400 dirhams.
On the other hand, all taxis in Dubai are going to use artificial intelligence technology under which smart cameras are being installed in taxis to enable drivers to apply fast, sudden or unnecessary braking and other driving skills and traffic regulations.

We will monitor, note the restrictions on drivers and passengers wearing masks and corona, and monitor the implementation of social distance restrictions during travel.

If a driver is found to be driving impaired, the Roads and Transport Authority will send warning messages and conduct corrective driving courses on repeated violations such as speeding, abrupt or unnecessary braking. The authority has started using this new technology to test the driving errors and professionalism of the drivers.

Khalid Al-Awadi, director of the authority’s transport systems department, said the installation of state-of-the-art technology and smart cameras would go a long way in enforcing traffic laws, which could make the lives of both drivers and passengers safer. The driver’s professionalism and behavior are usually checked only after a passenger’s complaint, but with the help of this technology, the driver is being monitored at all times while driving.

With the help of artificial intelligence technology, drivers will be alerted immediately about their wrong driving or traffic violations. However, in doing so, the condition of a road and other conditions will also be taken into account. This system will be of great help in identifying irresponsible drivers and will also create transparency in action against them.