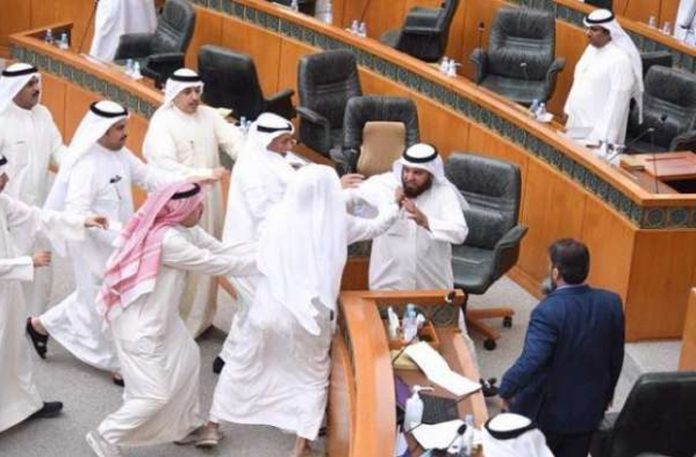 Kuwait City (Gulf Inside) Kuwait’s parliament has been plagued by clashes and beatings over the past few decades, which have graced the news in newspapers and electronic media around the world. In Kuwait, the parliament has once again witnessed violent riots, scuffles, and bitter rhetoric. According to Urdu News, Kuwait’s next national budget was approved yesterday.

However, a very violent atmosphere prevailed on this occasion. During the budget session, there was a scuffle between the MPs. The parliamentary force had to intervene when the opposition and government members clashed. 32 MPs voted in favor of the budget. 30 MPs did not participate in the voting. During the meeting, the opposition members occupied the ministerial seats.

Also Read This: All Preparations For Hajj Baitullah Have Been Completed

The speaker of the Kuwaiti parliament, Marzouk al-Ghanem, convened a special session of parliament to discuss the budget. During the meeting, Kuwaiti ministers stood at the entrance to the parliament hall as opposition members occupied their seats. Some members even set up desks to suspend the debate on the budget. The Kuwaiti government and parliament have been at loggerheads for decades.

One government after another has changed and parliament has been dissolved. This situation has affected the reform and investment climate in the country. Members of Parliament are seeking an answer from Prime Minister Sabah Khalid Al-Hamd Al-Sabah on the constitutional status of his decision issued in March, under which he will resign by the end of 2022. Had postponed his reply. In addition, the opposition is seeking answers on issues such as corruption.