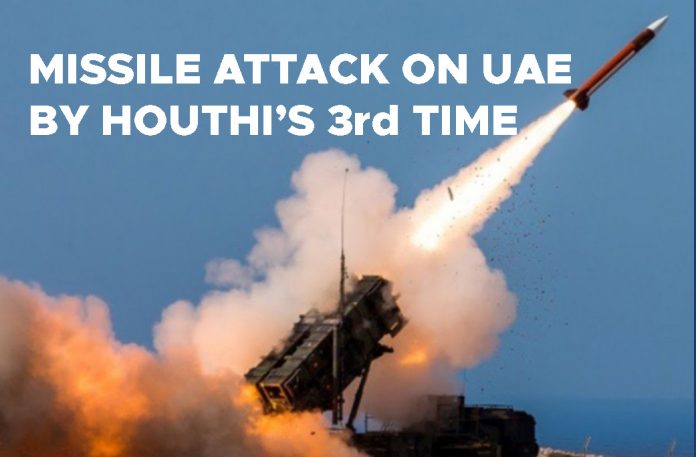 The Ministry of Defense announced early morning on Monday the interception and destruction of the ballistic missile launched towards the UAE.

The ministry said in a tweet that the UAE air defense had intercepted and destroyed a ballistic missile launched by the Houthi terrorist group towards the country. “The attack did not result in any losses, as the remnants of the ballistic missile fell outside the populated areas,” the ministry added.

“The UAE air defense forces and the Coalition Command had succeeded in destroying the missile launcher in Yemen after identifying locations of the sites.”

The ministry affirmed its “full readiness to deal with any threats,” adding that it will “take all necessary measures to protect the UAE from any attacks.”

The ministry also called on the public to follow the news from the UAE’s official authorities.

The General Authority of Civil Aviation said there is no impact on flights and airports as a result of the ballistic missile attack launched by the Houthi militias on the country.

This is the third attack by the Yemen-based rebel group on the UAE. Deadly strikes on January 17 killed three civilians and destroyed Abu Dhabi National Oil Company (Adnoc) fuel depots and caused a minor fire in the construction area of the Abu Dhabi International Airport.

Houthi attacks on UAE drew criticism from all over the world, including the UN, the UK and the US.

Best UAE Job Sites to Find Job in Dubai and Other...