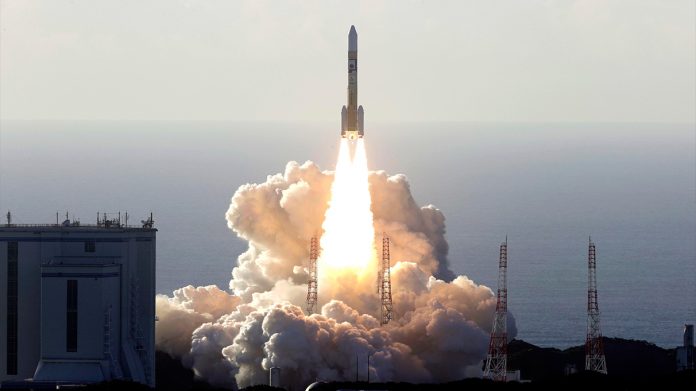 Dubai (Gulf Inside) UAE Mars Mission 2020: The United Arab Emirates has now planted the flags of its greatness in the space arena as well. The UAE sent its rocket to Mars. Only the United States and China have won the award before, while the UAE has become the first country in the Arab world to receive the award. The H-2A rocket mission sent to Mars for further investigation has been dubbed the Hope Probe.

The Emirati rocket was launched from the Tenigashima Space Center in southern Japan at 7 am (Emirati time) this morning. The rocket sent to Mars by the UAE has no human occupants. The rocket will gather more information about Mars. As soon as the plane took off from the Tenega Shima Space Center under the Emirates Space Mission, there was a long round of applause in the control room.

The news of the launch of the UAE space mission was met with great joy in Dubai. Sarah Al-Amiri, Deputy Project Manager, UAE Mars Mission, said that she was feeling immense happiness, which cannot be described in words. “This is the future of the UAE,” Amiri, who is also the Minister of State for Advanced Sciences, said in an interview with Dubai TV from the Mars mission’s launch site.

Read This : Shisha cafes in Dubai & Swimming in Abu Dhabi set to reopen

The UAE has been preceded by space missions to Mars by the People’s Republic of China called Tianwen-1 and Mars 2020 by the United States. Mars is the closest planet to Earth, also called the Red Planet. The US space agency NASA says that in October, Mars gets closer to the Earth, during which the distance between the two planets is reduced to 62 million kilometres.

The Emirati rocket Hope is expected to enter Mars orbit in February 2021. The 50th anniversary of the unification of the seven states of the United Arab Emirates will also be celebrated on the occasion. Although space missions sent by the United States and China will land on Mars this year, the UAE space mission will not land on Mars, but will stay in orbit for a year, 687 days. Ga, which will include research on the weather and atmosphere of Mars.

Space scientists are vowing to make the plan to settle humans on Mars a success in the next 100 years. Space scientists were inspired to send a space mission to Mars 10 years ago when it was discovered that there was once water on Mars. The UAE government also crossed this important milestone. A message has been released on his Twitter account in which he described it as a very proud achievement for the UAE.

Imran Sharaf, project manager of the UAE space mission, said that Hope Probe would conduct research on the whole of Mars from a special point of view. Thanks to this space mission, for the first time, the world’s space science community will be able to keep abreast of climate and climate changes on Mars at different times of the day during different seasons. He added that if a decision is made to send a man to Mars in the future, the UAE has a well-planned plan to play its part in this global mission.

Covid-19 Antibody test Now get diagnosed in Dubai for only 200...

How To Check Travel Ban In UAE 2022 Complete Guide

All Emirates Flights Will Be Resumed By Next Year