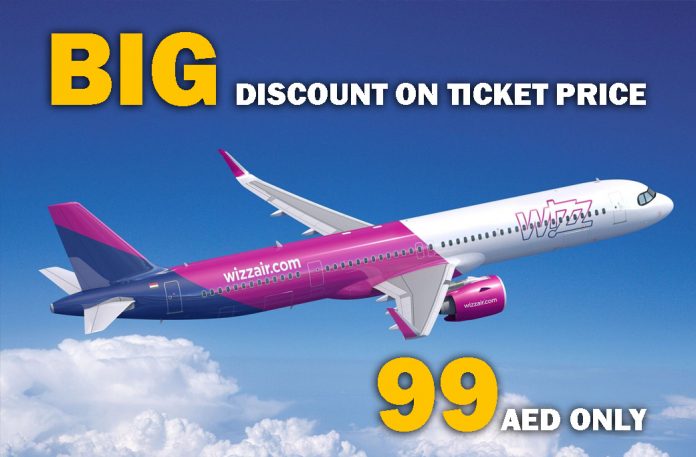 Abu Dhabi (Gulf Inside) On the occasion of UAE National Day, Abu Dhabi Airlines announced the sale of tickets for 99 dirhams. According to the UAE News Agency, UAE budget carrier Wizz Air Abu Dhabi has announced a special promotion on the occasion of the 50th National Day of the United Arab Emirates, under which the airline will offer 10,000 available seats on selected flights from Abu Dhabi. Is offering 99 dirham tickets.

Discounted flights are available for sale on Wizz Air’s website and on the airline’s mobile app. Passengers can book tickets with Wizz Flex, where they can cancel their flight up to three hours before departure free of charge. And receive 100% of the immediate fare paid on the airline’s credit.

Russia operates flights to Muscat (Oman), Odessa (Ukraine), Sarajevo (Bosnia), Sohag (Egypt), Tel Aviv (Israel), Tirana (Albania) and Yerevan (Armenia). It may be recalled that Etihad Airways also offered to book tickets at 50% discount to commemorate the 50th National Day of the UAE. However, this discount of up to 50% on Etihad tickets was only for a limited time of 50 hours.

This offer is valid until midnight on Wednesday 1st December, during which time the booked tickets will be valid for travel till 14th June 2022, Even now on booked tickets you can change your flights later without incurring additional costs. These flights start from 695 dirhams for economy class and 2,495 dirhams for business class travel. There were flights to London, Barcelona, ​​Rome, Singapore, Doha and other selected destinations.

Earlier, Emirates, a leading airline based in Dubai, UAE, has also announced a 50% discount on its fares. In connection with the ongoing celebrations, under which passengers traveling with children will get 50% discount in fares, fares starting from 1395 dirhams have been given, the company said in London, Bangkok, Kuwait. , Has also announced special discounts on air tickets to New York and Mauritius, as well as a 50% discount on hotel bookings for passengers booking packages with Emirates Holidays.