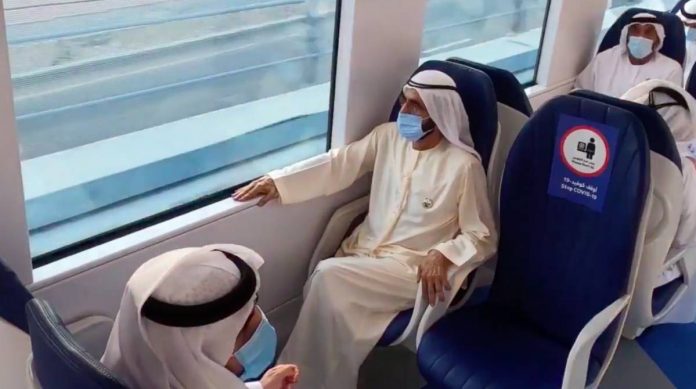 Dubai (Gulf Inside) The ruler of Dubai, Sheikh Mohammed bin Rashid Al Maktoum, released a Twitter message after the inauguration of 7 new metro stations, which has once again won the hearts of the people.

Sheikh Mohammed bin Rashid Al Maktoum, the ruler of Dubai and a beloved figure among immigrants and locals, has inaugurated seven new stations on the Dubai Metro’s Red Line route. “We say what we do, and we do what we say, we deliver on what we promised,” he said in a message from his Twitter account.
This message has won the hearts of Dubai-based immigrants and Emiratis. Sheikh Mohammed bin Rashid also shared photos of 7 new metro stations in Dubai through his Twitter account.

He shared details of a plan to add 15km to the Dubai Metro’s red line route, adding that the project to build seven more new stations cost 11 billion dirhams, employed by 12,000 engineers and technicians. ۔

50 new trains will run on this route. This new route will be opened to passengers. The rent at these stations will be collected through smart gates in which 3D cameras with state-of-the-art technology are also being installed. As a result, millions of passengers will be facilitated every month.

.@HHShkMohd inaugurates the #Dubai Metro’s Route 2020 with a 15 km route length, seven stations and at a cost of AED 11 billion. Route 2020 will be open to the public this September. pic.twitter.com/SoVzg7cJDg

According to the local news paper, the ruler of Dubai arrived at Jabal Ali station to inaugurate the new stations, where he rode on the route of the new stations to Metro Train’s Expo 2020 station. Puts it
Which, of course, made the video an overnight sensation. Sheikh Mohammed bin Rashid also shared photos of this very beautiful person on his Twitter. A magnificent blue memorial has also been constructed at Expo 2020 station, designed by renowned artist Al-Saeed. Blue is presented as a symbol of stability, loyalty, trust, intelligence and peace.