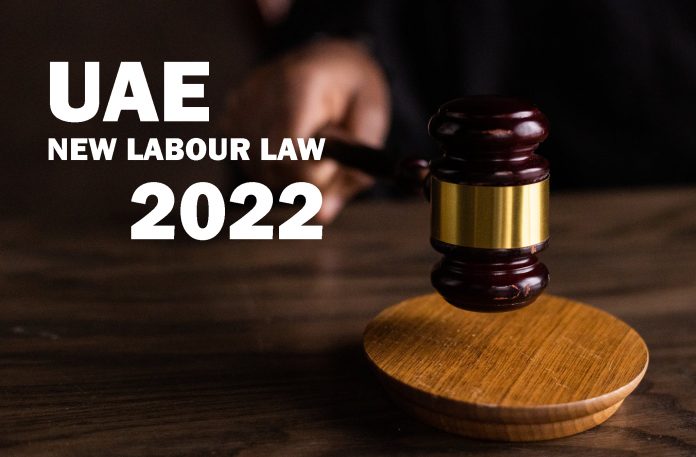 Abu Dhabi (Gulf Inside) The new UAE labour law 2022 has been announced to protect workers in the United Arab Emirates. The new law will provide more protection to employees against bullying, harassment and illegal confiscation of documents. According to Gulf News, a new law regulating labor relations has been announced in the UAE. The new law is an attempt to provide more protection to employees against harassment and confiscation of documents.

During a media briefing in Dubai, the Minister of Human Resources and the UAE, Dr. Abdul Rahman Al-Awar, announced Federal Decree No. 33 of 2021 regarding the Rules of Labor Relations. The new law will come into force on February 2, 2022. Labor relations in the country are expected to be more flexible as the new law seeks to provide more protection to employees against bullying, harassment and illegal confiscation of documents.

Under the new law, working fathers are entitled to five days of paternity leave, which will be taken simultaneously or intermittently for six months after the birth of the child.

Mothers receive a full 45 days of maternity leave, which under the new law increases to an additional 15 days on half pay. If the new mothers are not ready to return to work after the maternity leave, they are entitled to an additional 45 days free of charge to care for themselves or their new baby in case of illness. However, a medical certificate must be presented as a supporting document.

If the child is born with a disability, the mother may receive an additional 30 days’ full paid leave in addition to the basic maternity leave, which may be extended for another 30 days without pay.

After completing two years with the employer, workers are entitled to 10 days study leave if they enroll in a recognized institution within the UAE.

Employees are also entitled to one day’s pay with the possibility of increasing the weekly rest days at the discretion of the company.

Employees can now work on a project or hourly basis for multiple employers under the new models introduced to adapt to the post-Code-19 world.

The law introduces part-time, temporary or flexible agreements in addition to the regular full-time scheme.

Part-time work allows employees to work for hours or days set aside for work for one or more employers, while temporary work may be contracted for a specific period of time or based on a project that employs Ends with completion.

Flexible work gives employees the freedom to work at different times according to the terms and conditions of employment, in addition to the full-time work currently available in the labor market. Under the new law, the contract covers hours, days and essential duties.

More work models will be introduced, including self-employment; Hard work week, which enables employees to complete their working hours on specific days instead of one week. And a joint employment model, which enables two employees to split jobs and make payments based on an agreement with the employer.

The probationary period is still limited to six months, but under the new law, employers must submit 14 days’ written notice before dismissing an employee. Previously, removal during probation was effective immediately.

If one of the parties has violated these rules, the other party will have to pay the other financially with a salary equal to the regular working days of the remaining notice period.

From next year, employers will only be allowed to issue limited (fixed term) agreements, which can be renewed every three years, for a period of eighty years or less, on the agreement of both parties.

The termination of unlimited contracts helps to consolidate the end benefits of the service and other entitlements across the country.

Employers will be given a one-year grace period, beginning with the enactment of the law in February 2022, until the deadline for amending and correcting employment contracts.

In an unprecedented move, the new law will set a minimum wage for employees in the private sector. The UAE cabinet will work with the relevant authorities to determine the minimum wage following a proposal by the UAE Minister of Human Resources.

Earlier, the UAE’s labor law did not set a minimum wage, which was widely used to describe the basic needs of employees.

The employer is prohibited from forcing employees to leave the country after the termination of employment or termination of the contract. Under the new law, workers are allowed to go to the new employer and stay in the labor market for profit.

Under the new UAE labour law, employers are now bound by a non-discriminatory policy in hiring employees on the basis of gender, race, color, nationality, religion, social origin or disability.

The law also protects employees from being sexually harassed, bullied, verbally, physically or emotionally by employers, superiors and co-workers.

Employers will not use force against employees or threaten to punish employees for failing to act against their will.

The law clearly defines equal pay for equal work for women, or other work of equal value, as for men. The cost of the work will be decided by the cabinet later.

The law emphasizes that all provisions regulating the employment of workers will apply without discrimination to working women.

The new law exempts workers from legal fees at all stages of litigation, enforcement and petitions filed by workers or their heirs, the value of which does not exceed DH 100,000.

It also provides that the employer will bear the recruitment and employment fees and expenses and will not receive them directly or indirectly from the employee.

It may be recalled that a few days ago, the UAE government had introduced special family laws for non-Muslim immigrants residing in Abu Dhabi. Sheikh Khalifa bin Rashid Al Nahyan approved the new law. Will apply to Muslims in accordance with international legal provisions, the purpose of enacting the new law is to harmonize the situation of non-Muslims residing in the state and to resolve their family matters while residing in the country.

In this regard, the Secretary and Legal Adviser of Abu Dhabi Judiciary Yousuf Saeed Al-Abri said that the family law applicable to non-Muslims residing in the state of Abu Dhabi is a unique experience of its kind. A separate unit has been set up under the judiciary for family law for non-Muslims, where court proceedings will be conducted in Arabic and English.

He said the new family law includes more than 20 provisions that cover every aspect of private life, one of the provisions of the law applicable to non-Muslims is marriage and divorce laws. The second clause deals with the rights and obligations of the spouses which includes division of property and financial matters in case of divorce while the third clause of the new law deals with the issue of custody of children after divorce. In addition, the fourth clause of the new law relates to wills and inheritances, under which any non-Muslim now residing in the UAE will have the right to transfer all or part of his property to someone else.

How to Teach Islam to Toddler?