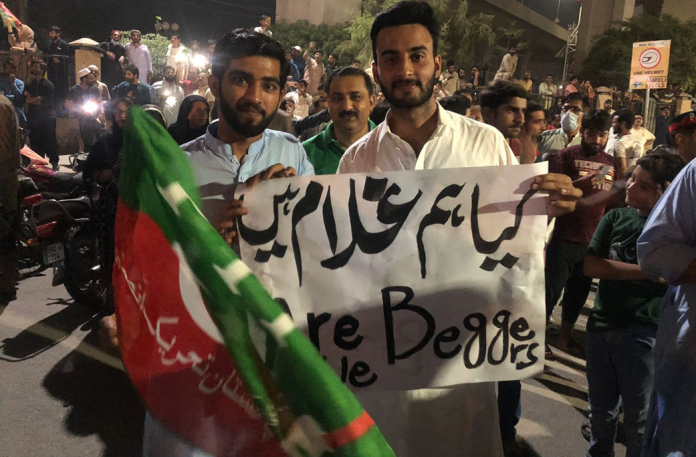 Karachi (Gulf Inside) PTI Protests : The removal of Prime Minister Imran Khan in a parliamentary no-confidence vote early Sunday morning has put Pakistan on an uncertain political path, with supporters taking to the streets in protests across the world and political opposition taking their place.

Hundreds of thousands of Imran Khan’s supporters & workers of PTI protests in cities across Pakistan in the month of Ramadan, waving large party flags and announcing their support. The youth, who are the backbone of Khan’s supporters, dominated the crowd.

In the southern Arabian port city of Karachi, more than 20,000 people chanted slogans promising to bring Khan back to power. In Islamabad’s capital, the lights of thousands of supporters lit up the night sky as Khan walked through the crowd on top of a brightly colored truck.

Khan was brought down after a day’s play. His supporters accused Washington of sacking him, and his party walked out of parliament shortly before the vote. Finally, in the 342-seat parliament, 174 lawmakers voted to remove him, two more than the required simple majority.

On Twitter, Imran Khan thanked the entire nation. He added, “Thank you for the strong support of all Pakistanis for protesting against the US-backed change of government and for expressing strong sentiments to a group of thugs who were released on bail by the local Mir Jafar. I tried to bring it. ”

Thank you to all Pakistanis for their amazing outpouring of support & emotions to protest against US-backed regime change abetted by local Mir Jafars to bring into power a coterie of pliable crooks all out on bail. Shows Pakistanis at home & abroad have emphatically rejected this

The former prime minister said that the demonstrations showed that Pakistanis at home and abroad had categorically rejected the alleged conspiracy.

Never have such crowds come out so spontaneously and in such numbers in our history, rejecting the imported govt led by crooks. pic.twitter.com/YWrvD1u8MM

Khan’s successor will be elected in Parliament on Monday and will be sworn in. Leading contender is Shahbaz Sharif, the brother of former Prime Minister Nawaz Sharif.

Shahbaz Sharif is the leader of the largest party in the diverse coalition of opposition factions, ranging from the left to radical religious. Imran Khan’s nominee for PM will be Foreign Minister Shah Mehmood Qureshi.

In an interview with a local television channel, Qureshi said the party was still debating whether its lawmakers would resign from parliament after the prime minister’s vote.