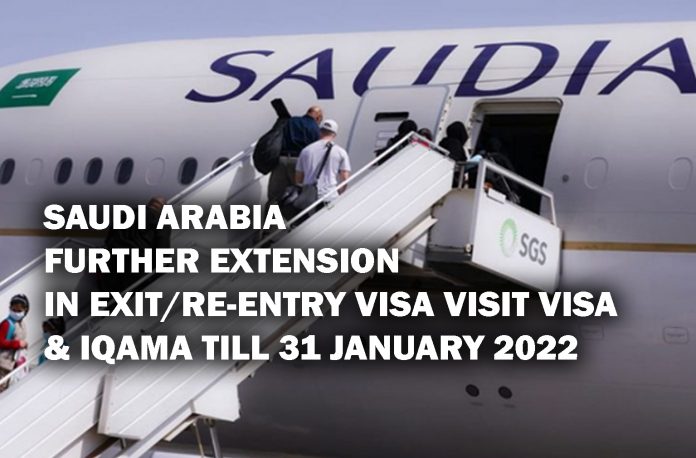 Riyadh (Gulf Inside) Saudi Arabia has once again announced free extensions of Saudi Arabia Exit/Re-entry visa, Residency Permits, & visit visas of foreigners in countries banned from entering the King dome due to the Corona epidemic to 31 January 2022 automatically, According to the Saudi News Agency, the Saudi Arabian Passport Department said in a statement that on the instructions of King Salman bin Abdul-Aziz, the Residence permits, Exit/Re-Entry visas will be extended until January 31, 2022. Being done without fees and financial competition,

Saudi Finance Minister issues orders to implement expansion under national policy
The Passport Department has informed that the extension process of Saudi Arabia Exit/Re-entry visa, residency permits & visit visa  will be done under automated system in collaboration with the National Information Center. For this purpose, foreigners will no need to approach the Passport Department offices and the Saudi embassies or consulates abroad. The facility will be exempt for foreigners who have taken both doses of the vaccine inside Saudi Arabia before leaving the country.

It should be noted that Saudi Arabia has lifted the travel ban imposed on 7 countries including Pakistan, after which the nationals of 7 countries include Pakistanis have been allowed to enter the country directly, direct passenger flights from Pakistan to Saudi Arabia will be able to operate, this decision of the Saudi government. Thousands of Saudi residency holders have been able to return to Saudi Arabia because of the fact that they were unable to return to Saudi Arabia after coming to Pakistan several months ago, in this regard by Allama Tahir Ashrafi, Special Assistant to Prime Minister Imran Khan. The Saudi leadership was also thanked for responding.