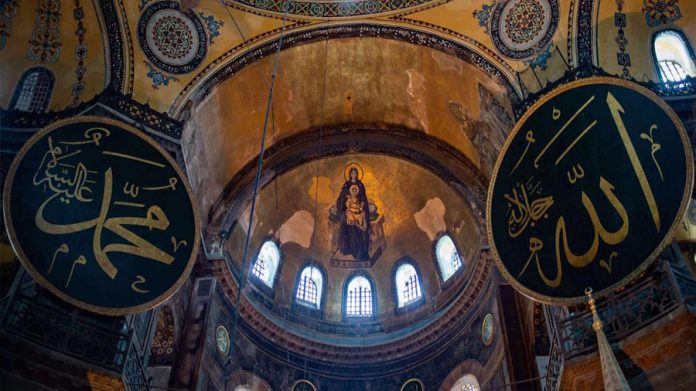 Web Desk (Gulf Inside) The World Council of Christian Churches has expressed sadness and disappointment over Turkish President Recep Tayyip Erdogan‘s decision to convert the historic Aya Sofia into a mosque.

The World Council of Churches, an organization representing 350 churches, expressed this frustration in a letter to the Turkish president on Saturday.

In her letter to the Geneva-based interim secretary general of the council, Iona Sausa, wrote that since its conversion into a museum in 1934, Aya Sofia has been a place open to people of all faiths. The 1,500-year-old UNESCO site was an Orthodox Christian church until the conquest of Constantinople by the Ottoman Empire in 1453.

Read More : Turkey: Congregational prayers will be held in Hagia Sofia from July 24

The order was issued after a Turkish court revoked the building’s museum status.

A statement issued by the council on Saturday said, “Whether or not the decision to convert Sofia into a mosque has turned Turkey’s tolerance and its diversity into divisions and differences. The decision will create an atmosphere of uncertainty and mistrust and prevent people of different faiths from uniting in one place.

The council warns that “this decision will also help groups in other countries who want to change the existing coexistence and promote division in different communities.”

Toyota Land Cruiser 2022 Price In UAE With Features And Specs

The best free YouTube downloader apps to use in 2022

Friday prayers at the Hagia Sophia Mosque in Istanbul after 86...