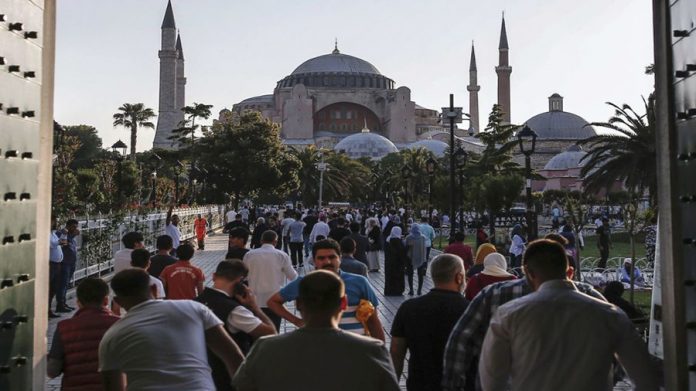 Istanbul (Gulf Inside) Following the decision to turn Hagia Sofia into a mosque at the Istanbul Museum, the call to prayer was given there on Friday, which was broadcast live on Turkish channels. President Recep Tayyip Erdogan has said that congregational prayers will start from July 24.

Sophia was built as a church in the Byzantine period 1500 years ago. 900 years later, the Ottoman army captured Istanbul and turned it into a mosque. When the Ottoman Caliphate ended 80 years ago, it was turned into a museum.

For years, religious leaders and nationalists in Turkey have been pressuring Hagia Sophia to build a mosque. Analysts say President Erdogan has contributed to the effort at a time when his political support is waning.

Is Sofia’s huge dome an integral part of the Istanbul landscape where 3 million tourists visit every year? Although turning it into a mosque will not stop tourists from coming, critics say a change in its nature will reduce its appeal. The United States and Greece have criticized the decision.

In a statement this month, US Secretary of State Mike Pompeo called on the Turkish government to maintain Sophia as a museum in order to maintain Turkey’s respect for religious traditions and its diverse history. Make sure you have access to it.

A Greek government spokesman said the conversion of Sophia into a mosque would create a great emotional rift between Christians in Turkey and around the world.

Hagia Sophia: UNESCO deeply regrets the decision of the Turkish authorities, made without prior discussion, and calls for the universal value of #WorldHeritage to be preserved.

The United Nations Educational, Scientific and Cultural Organization (UNESCO) has expressed regret over the decision and called on Turkish authorities to negotiate without delay. But President Erdogan has said in a TV interview that this is a matter of Turkey’s sovereignty.

Friday prayers at the Hagia Sophia Mosque in Istanbul after 86...

The World Church Council has expressed regret over the conversion of...